An orthomosaic, also known as an orthophoto, is an aerial image of an area, composed of multiple photographs stitched together using photogrammetry, which has been scaled and geographically corrected for accuracy. Usually, orthomosaics are of much higher resolution and detail than satellite imagery of the same area, thanks to the use of high-resolution cameras at a relatively closer distance from the ground.

In commercial applications like construction or mining, orthomosaics are ideal for providing a quick, measurable snapshot of a work site at the time of data collection. These orthomosaics can be compared to past scans of the same site, and with regular scans, can create a recorded continuum of changes over time.

Orthomosaics are very useful for analyzing the features of a large plot or area of land. With higher resolution and detail compared to satellite imagery, as well as the ability to quickly update the imagery using drone mapping software, orthomosaics are used in commercial sectors like surveying, construction, mining, agriculture, and land management. Also, because orthomosaics are scaled and georeferenced for accuracy, they are reliable for conducting precise measurements and calculations. 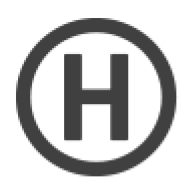